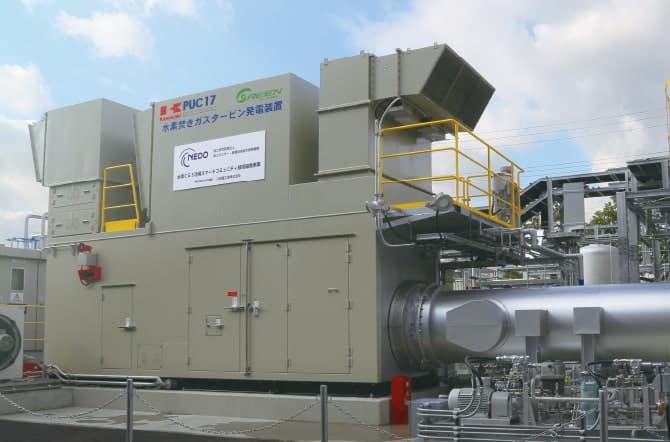 Hydrogen has a wide range of application potential to gas-turbine power generation, fuel cell vehicles and so on. As an energy source, it does not emit CO2 during use, which is why many expect it to play a primary role in the future as an ultra-clean energy fuel. NEDO is carrying out the program “Technology Development Project for Building a Hydrogen-based Society”. Working together with NEDO, Kawasaki and Obayashi conducted hydrogen-fueled cogeneration system demonstration, in cooperation with Kobe City, The Kansai Electric Power Co., Inc. and other parties from FY 2017 to FY 2018. In the power generation unit, taking into account the introducing stage for hydrogen society, both natural gas and hydrogen mixed gas as well as 100% hydrogen were available using conventional diffusion flame combustion. And water injection method to suppress NOx generation due to local high-temperature area in the combustion gas was used. Through these tests, project members successfully supplied, for the first time worldwide, both electricity and heat from 100% hydrogen-fueled cogeneration system at an urban area on Kobe’s Port Island.*2 Kawasaki has been developing 100% hydrogen-fueled gas turbine with dry low NOx combustion technology since FY 2019, and these latest testing results represent the technology’s first successful verification anywhere in the world.*1 In this verification tests, improvements of electrical efficiency, environmental impact (lower NOx emissions) with dry low NOx combustion technology have been investigated. The water injection method previously used for purposes of mitigating NOx emissions induces the reduction of electrical efficiency, because of evaporation of water spray in the hot combustion gas. In comparison, use of the dry low NOx combustion method improves the electrical efficiency and NOx emission values. However, in case of hydrogen, high combustion speeds characteristics causes the problem of flashback. To realize both stable hydrogen combustion and low NOx emissions is an important issue. To address this issue, Kawasaki applied the micro-mix combustion technology, which features ultra-small hydrogen-fueled flames, to the industrial gas turbine combustor, and successfully developed the world’s first 100% hydrogen-fueled dry low NOx gas turbine, during the verification tests started in May 2020 on Kobe’s Port Island. The cogeneration system combining this hydrogen-fueled gas turbine and a heat recovery steam generator is capable of supplying approximately 1,100 kW of electricity and approximately 2,800 kW of thermal energy in the forms of steam or hot water to public facilities in the area.

The verification tests started in May 2020 are planned for continuation of intermittent operation until the end of FY 2020 in order to confirm stable hydrogen-fueled power generation using the dry low NOx combustion method as well as the system’s electrical efficiency, environmental load reduction results and other performance factors. As gas turbine tests continue, simultaneous verification tests will be started in this fall for an integrated energy management system*3 intended to provide overall management for the hydrogen that serves as fuel along with heat and electricity used by local community facilities in the area, as well as optimized control aiming at high economic efficiency, environmental performance and so forth. This series of tests will be conducted to evaluate the future feasibility of business applications for the energy management system. In addition, Obayashi is pursuing research into a system capable of effectively leveraging the cold energy generated by the liquefied hydrogen at –253°C (1 atm). An evaporator is used to revert the liquefied hydrogen, needed as fuel in gas turbine operations, back into gas form to be extracted, but currently the cold energy from the evaporator is not being put to any meaningful use. Furthermore, during the summer and other times of the year when outside air temperatures are high, increases in gas turbine intake-air temperatures lead to reduced electric output, and disparities with outside air temperatures cause frosting on the evaporator used for liquefied hydrogen, which necessitates operation stoppages in order to remove the frost. Obayashi’s research aims to harness the cold energy resulting from gasification of liquefied hydrogen in order to lower intake-air temperature in the gas turbine, thus improving electric output and efficiency in the hot summer months when demand for electric power is high. Researchers also hope to utilize an intermediate thermal medium (such as propane gas) in order to remove cold energy from the liquefied hydrogen and prevent evaporator frosting, thus enabling continued, uninterrupted system operation. If this system is fully developed for practical applications in the future, it will be possible to prevent wasting of cold energy provided by the liquefied hydrogen and achieve higher efficiency for the energy management system overall.

With the goal of realizing a hydrogen society by expanding applications of hydrogen as an energy source, NEDO, Kawasaki and Obayashi remain dedicated to this project in pursuit of new energy supply systems offering efficient energy use in local communities.

*2 World’s first successful supply of both heat and electricity by hydrogen-only operation of a gas turbine cogeneration system (at an urban area on Kobe’s Port Island):
Refer to the April 20, 2018 NEDO press release. https://www.nedo.go.jp/english/news/AA5en_100382.html

*3 Integrated energy management system:
A system that utilizes IT technology to optimize energy control with the aim of achieving energy savings in buildings, factories, etc. 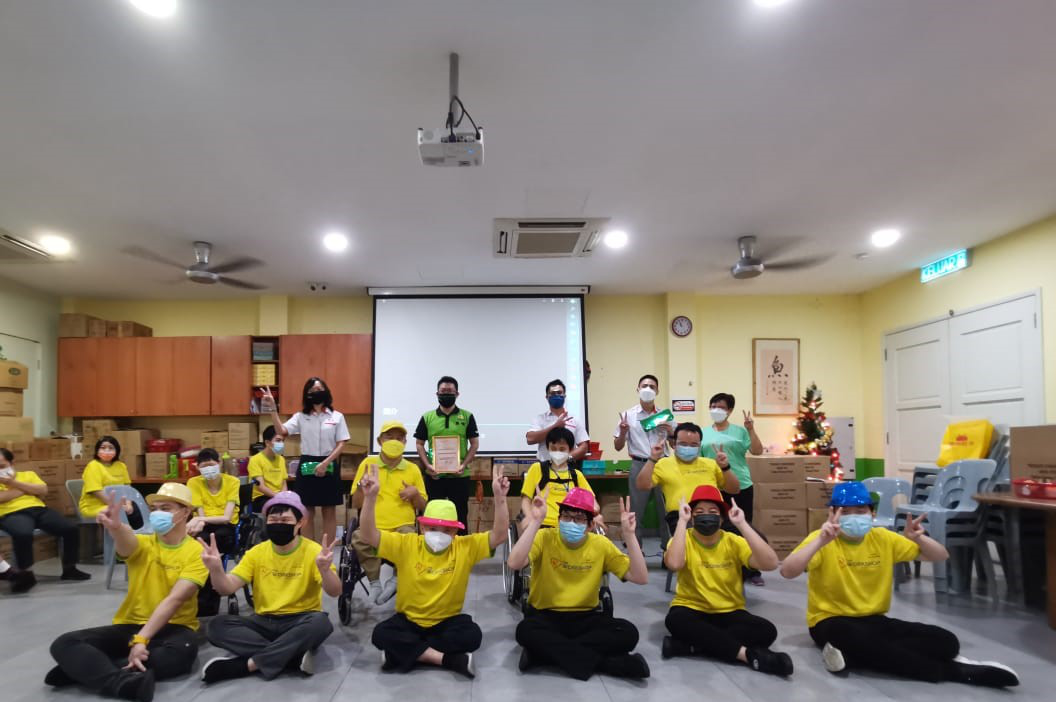 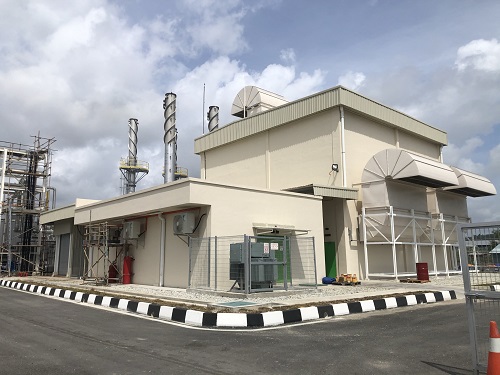 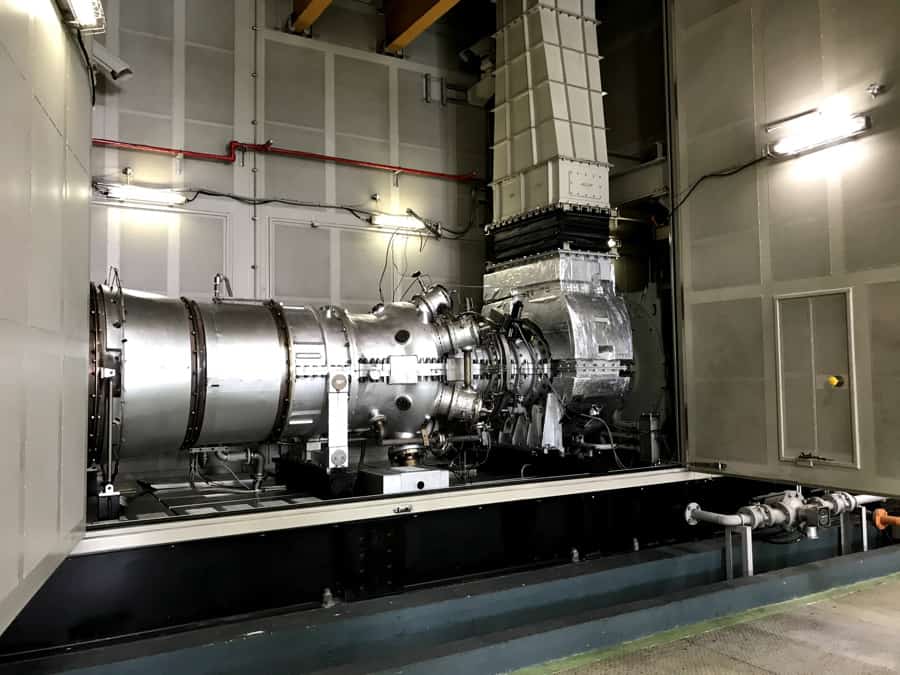 Talk To Us
Back
Menu How we achived 93% for one of our client.
Read Case Study